Important information regarding deliveries during the forthcoming Royal Mail strikes

Be the first to leave a review.

Who is it good for?

Latex condoms are an effective form of contraception. If used properly, latex condoms will help to reduce the risk of transmission of HIV infection (AIDS) and many other sexually transmitted diseases, including chlamydia infections, genital herpes, genital warts, gonorrhea, hepatitis B, and syphilis.

To open, carefully peel back the top of the buttercup packaging on the condom with your hands. Never use your teeth. The condom is right way up, so carefully use your fingers to pull it out of the package ensuring that the pointy part of the condom faces away from the tip of the penis before you put it on. Squeeze the pointy end of the condom so that there’s no air trapped inside. If there is trapped air, you risk the condom splitting. Additionally, it’s critical to make sure you put the condom on when the penis is fully erect, as you want to make sure it fits correctly and there are no baggy spots. Maude recommends always using lubricant on the outside of the condom as not only does extra lubricant increase sensitivity, but it also helps to prevent any breakages.

If you are uncircumcised, pull back the foreskin before keeping one hand at the head of the penis with the end of the condom between your forefinger and thumb, and use the other to roll the condom on all the way down the shaft to the base. Note: If the condom will not unroll, you have it inside out and you will need to use a new condom.

When done, hold the condom at the base while you are still erect so that it doesn’t slip off. Then, when fully withdrawn, take the condom off. Dispose of it carefully in the trash bin—never in the toilet. Use a new condom for each act of sex.

Order a one-time purchase here or subscribe and save below.

Latex condoms are an effective form of contraception. If used properly, latex condoms will help to reduce the risk of transmission of HIV infection (AIDS) and many other sexually transmitted diseases, including chlamydia infections, genital herpes, genital warts, gonorrhoea, hepatitis B, and syphilis.

One Order. One Tree.

Our pledge is that for every single order placed through our website, no matter how big or small, we will plant a tree on your behalf somewhere around the globe.

Over the course of 100 years your little trees will absorb over a tonne of C02, and we’ll give updates regularly through our newsletter on how we are getting on together and the impact your custom has! 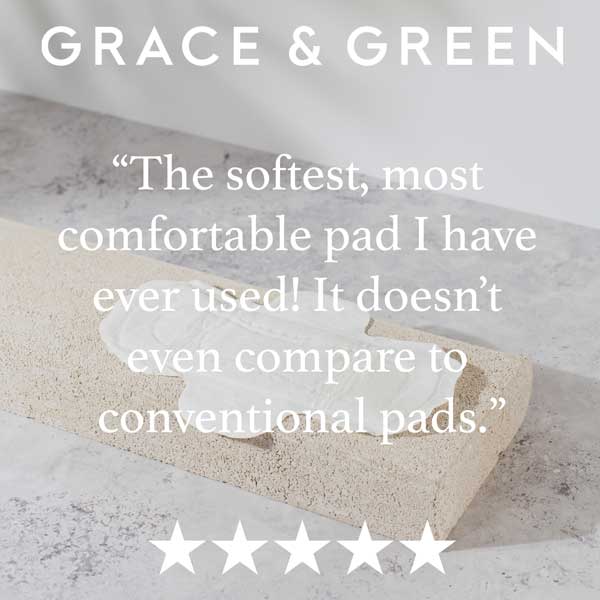 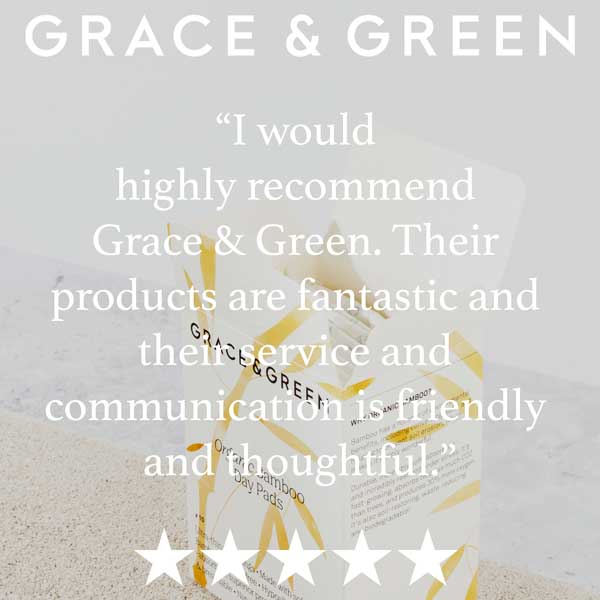 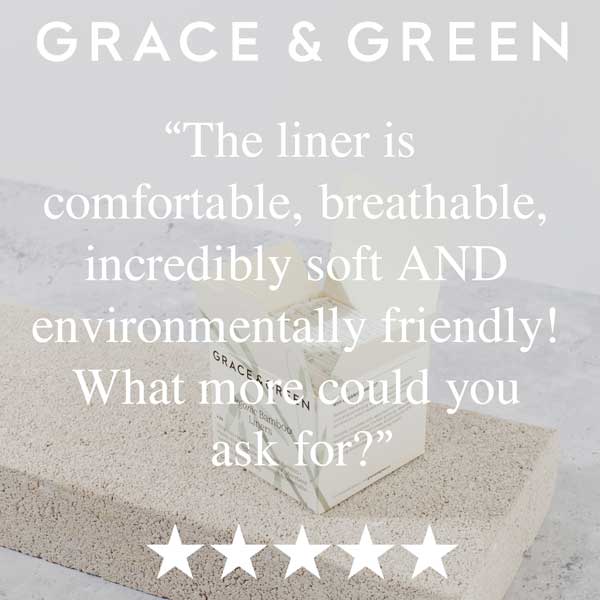 Use Your Cycle To Break The Cycle

Conventional sanitary products contain up to 90% plastic and riddled with chemicals. These products not only damage our environment but they are bad for our health. These include: bleach, chlorine dioxide, dioxins and rayons. Organic Bamboo requires no pesticides or fertilisers and only needs rainwater to grow.

Bamboo absorbs 5 times more carbon dioxide than trees and produces 35% more oxygen than trees. It is naturally the fastest growing plant in the world and rapidly renewable. Growing up to 3 feet in 24 hours and reaching maturity within 4-6 years – trees take 30-60 years.

There are no reviews yet.

Only logged in customers who have purchased this product may leave a review.

Please register to get your referral link.

Spread the word and get rewarded!

Give your friends 25% off their first Grace & Green subscription and you'll earn 25% off your subscription for each friend you refer. As always, for every G&G order, we’ll plant a tree 🌳 #winwin

Stress-free subscription, tailored to your needs.

Make a one-off order or choose a bespoke lifestyle subscription package and save up to 10% — delivered to your door monthly or quarterly.

Order what you need

Shop from our essential collection of certified organic products and create your own subscription based on your needs.

Make a one off purchase or choose to have your lifestyle product supply delivered months or quarterly (you can cancel any time).

Knowing that you’ve switched to an organic, healthier product and also made an eco-friendlier, cruelty-free choice and helped to improve lives.

Update, pause, or cancel any time. You’re entirely in control.

Stay in the loop

Get the latest from the Green Room directly to your inbox. We promise not to share your details with any third parties without your express permission and you can unsubscribe at any time.

Did you know that you can get 25% off your subscription each time you refer a friend? They’ll also get 25% off, so it’s a win-win!   Let’s make periods healthier & more sustainable together 🤍💪🏼

Through our @officialperioddignity programme, we aim to provide plastic-free, organic period care in all workplaces, educational institutions such as schools, universities, the public Sector (i.e. national government, NHS), and businesses to promote inclusivity and equality. 🌏

Our mission is to create a world where period and reproductive health is viewed in the same way as physical and mental health at work.
We are committed to normalising conversations, removing stigma, and taking women’s health seriously in your organisation.

We are committed to providing period care that is better for people and the planet. One way we are doing this is by using 100% GOTS certified organic cotton and bamboo. 🌍

Our products are produced without toxic pesticides or synthetic fertilisers and are free from genetically modified organisms (GMOs). ✨🌱

Exceptional period care that is intelligently crafted, non-toxic and cruelty-free. Our products are 100% certified organic, offering superior protection and 0% harm.

Whether you seek comfort, durability or a 100% natural product - Grace & Green is made with you and the environment in mind.

Shop via the link in our bio.

Whilst eating healthily and getting fit remain at the top of most people’s New Year's resolutions, research shows that increasing numbers of people are committing to doing more for the environment.

Our YOKU bundles are a beautiful way to bring more ethically made essentials into your day-to-day life. 💚   These bundles are also designed for gifting and we're now offering gift wrapping options for every gift bundle.

Our new gift wraps feature art work from one of our favourite artists, @marthasmithtattoo, with a selection between 3 designs.

You'll automatically be given the option to pick one of these when purchasing our bundles, guaranteeing a gift that is plastic free and biodegradable from products to packaging - all the way ...

Though there are wet wipes that are labelled flushable, they are typically made with synthetic materials, plastic or polyester that won’t break down. They also contain harmful chemicals which can cause irritation and allergic reactions.

Swipe through to learn more about the issues related to this product, as well as how you can manage menstrual hygiene. 🩸

The Grace & Green collection has been intelligently engineered from 100% organic cotton certified by GOTS (Global Organic Textile Standard), ICEA and carries the seal of organic cotton.

© Grace & Green is a registered trademark of the Hygiene Co.